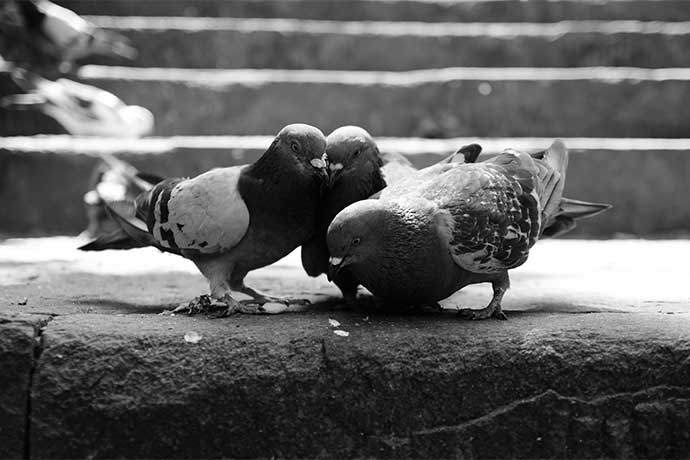 Recreational math problems and puzzles are key to learning how to solve problems. The ability to carefully tease out an answer from a complicated problem, reducing complexity and confusion to the simplest possible units, also is key to learning computer science and programming.

Every issue of this magazine will have at least one puzzle and math problem. Solutions will be offered at the bottom of the page but you have to promise not to to cheat and look up the answer. It's the honor system.

This problem comes from one of the oldest collections of mathematical problems, Problems to Sharpen the Young. Some scholars say the author might have been Alcuin, who lived from about 732 to 804 AD. Alcuin lived near the city of York, in England, and became a teacher and then head of the Cathedral School at York which still exists, as St. Peter’s School, York.

Here is the math problem to solve:

A staircase has 100 steps. On the first step stands a pigeon; on the second, two pigeons; on the third, three; on the fourth, four; on the fifth, five; and so on, on every step up to the hundredth where there are 100 pigeons on the hundredth step. How many pigeons are there altogether?

If pigeons gross you out, feel free to substitute kittens, hamsters, or whatever makes you happy.

Here are answers to the puzzle. Hopefully you tried to solve the problems instead of skipping down this page.

My teenage son also tells me this is an unfair puzzle to unleash on third graders. Perhaps.

Let’s begin by solving this problem for 10 stairs, to see what insights we might get to help solve the problem for 20 stairs and 100 stairs. It’s also easier to use a chalkboard or piece of paper to map out all the possibilities for a simpler version of this puzzle.

Here’s one way to solve for 10 stairs:

That’s difficult. And it doesn’t scale for 100 stairs or 20 stairs. So let’s think a different way. What if, instead of counting individual stairs, we counted in pairs? That would reduce our counting in half. And what if you tried different pairs of stairs, for example, counting the 1 pigeon on stair 1 with the 9 pigeons on stair 9? That’s 10 pigeons, an easy number to remember. If you look deeper, you’ll notice this pattern:

Of our 10 stairs full of pigeons, four pairs each add up to 10, don’t they? If you add the pigeons on stair 5 and stair 10, your count looks like this:

That can be expressed this way:

That’s much easier to calculate than adding each number individually, isn’t it? It’s 55 pigeons total on the 10 stairs.

The nine pairs each total 20 with the pigeons on stairs 10 and 20 counted as singles. The calculation is:

So let’s tackle how many pigeons would be on 100 stairs.

If we had to calculate the number of pigeons with software code, we could convert this process into the following steps, or pseudo code:

Let’s perform these tasks with a last even number of 10:

In writing this article, originally I had Step 1 as the second step. When I looked more closely, however, I realized the middle number is used in several steps. Therefore, I defined the middle number first, as Step 1, so it could be used in Steps 2, 3, and 5. This sort of optimization is part of the programming process, the fun part, I might add.

What is the value in defining this math pattern? With programming, you often have to reduce problems told as stories into math calculations. You also have to reduce the stories to their simplest form to make your code as flexible as possible.