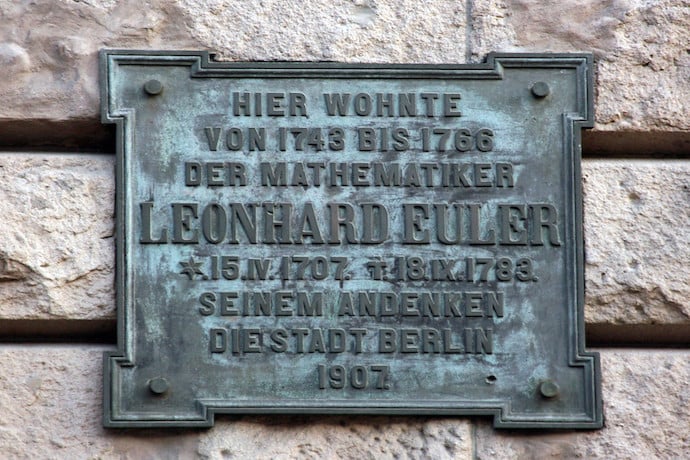 As sure as one plus one equals two, Swiss Physicist Leonhard Euler (pronounced Oiler) was destined to become, not only a mathematician, but the most important mathematician  of the 18th century, contributing to our understanding of geometry, calculus, mechanics, graph theory as well as astronomy and music. Euler’s identity, ei? + 1 = 0, which shows a connection between the most fundamental numbers in math, is considered to be the height of mathematical beauty.

Did you know, however, that toward the end of his career, Euler went blind? But, that did not stop him. In fact, when he lost sight in one eye, he was quoted as saying, “Now I will have less distraction.” While totally blind, he completed a comprehensive theory on the moon’s motion, with all of the analysis done in his head. Wow. In all, Euler’s work fills 60 to 80 volumes.

You might recognize some of Euler’s closest mathematician friends like Johann Bernoulli, whose work has application in the modern function of carburetors and airplane wings. His other bestie, Pierre-Simon Laplace, who proved the stability of the solar system, was a big supporter of Euler, urging others in the field to “Read Euler, read Euler, he is a master for us all”.