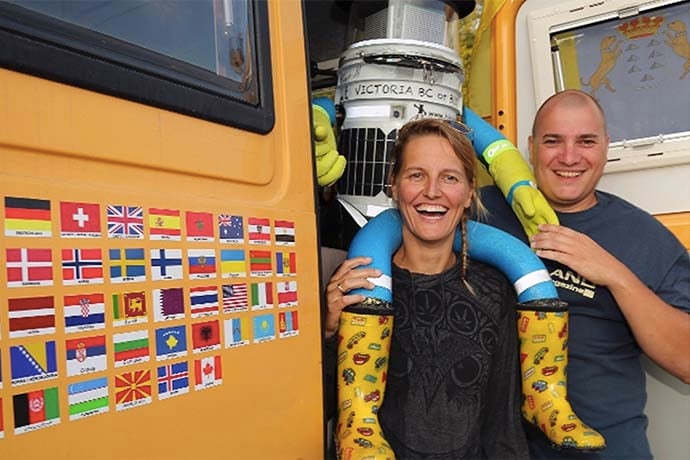 He was an international sensation. Kids loved him. Adults loved him. Journalists hung on his every move. Traipsing around in patterned Wellies, yellow gardening gloves, and a goofy grin, he was the most unlikely celebrity imaginable.
His name was hitchBOT, and he was a robot. A hitchhiking robot.

“This is both an artwork and a social robotics experiment,” explained the creators of hitchBOT, Frauke Zeller and David Harris Smith, in an interview with the Toronto Star. They wanted to see how people would react to this oddball creation. Would they enjoy hitchBOT’s friendly chatter and his Wikipedia-based factoids? Would they be receptive to his kooky appearance? And most of all — would the kindness of strangers be enough to get hitchBOT across Canada?

Yes. Yes it was. In July 2014, hitchBOT started his adventure in Port Credit, Ontario. Over the course of 26 days and 19 rides, he travelled all the way to Victoria, British-Columbia — over 10,000 kilometres! There were some fun detours: a wedding, a camping trip, and even a First Nation’s Pow Wow. Whimsical photos popped up on social media: hitchBOT eating batteries for breakfast, going to the toilet, riding ducks. People weren’t just helping this robot; they were having fun with him.

HitchBOT’s creators were more than a little surprised.

In general, society has mixed feelings about robots. As they become more common and more versatile, people wonder what impact robots are going to have on our society. Will robots make our lives easier — washing our dishes, mowing our lawns, helping us diagnose illnesses? Will they take away valuable jobs?

Books and movies have equally mixed portrayals. On one side, there’s Skynet from the Terminator Saga: a bloodthirsty artificial intelligence bent on world domination. On the other end of the spectrum is Baymax from Disney’s Big Hero 6. Helpful, caring, and shaped like a marshmallow, he’s the ideal robot BFF. But is there a grain of truth inside either of these representations? Can humans trust robots or not?

A question that’s becoming more and more common, and one that Zeller and Smith flipped on its head by asking: “Can robots trust humans?”

HitchBOT was helpless. He couldn’t move anything but his thumb, and he needed external help to charge his battery. His only hardware was a camera (as eyes), a microphone (as ears), and an Android Tablet for a brain. To make hichBOT sociable, Zeller and Smith’s team taught him some basic conversation skills using Cleverscript, a Natural Language Understanding (NLU) engine built by Existor.

And yet, despite his limited abilities, hitchBOT seemed to live a charmed life. He travelled across Canada, Germany, and the Netherlands. He spent an entire week with a heavy metal band. He went to a comic convention. He even had his portrait painted!

In July 2015 came a reality check. Two weeks after his American debut in Boston, hitchBOT’s tour of the USA came to an abrupt end when the robot was destroyed by vandals in Philadelphia.

Fans were devastated. Which is a little weird, when you think about it. At 3-feet tall, with a bucket torso and pool noodles for limbs, hitchBOT looked like something you’d scrounge up at a garage sale. Where did his popularity — 21,000 followers on Instagram and 55,000 on Twitter — come from? What, exactly, made fans love him so much?

For starters, hitchBOT was unorthodox for a science (or even a social science) experiment. He wasn’t a carefully regulated trial in a lab; he was something new and adventurous. People were willing to be playful and inventive around him. So perhaps the story is less about hitchBOT, and more about the community of creative people that formed around him. After all, half the fun of hitchBOT was seeing the silly photos and the funny stories people posted about him. He was, ultimately, a collaborative project.

And while hitchBOT’s ending may seem sad, the reality is that hitchBOT met dozens — if not hundreds — of kind, compassionate people on his international journeys. The world might not be perfect, but there’s a certainly lot of fun hidden away where we least expect.

And there’s a happy ending after all — hitchBOT was eventually repaired, and he’s scheduled to be displayed at the Canadian Museum of Science and Technology in November 2017!