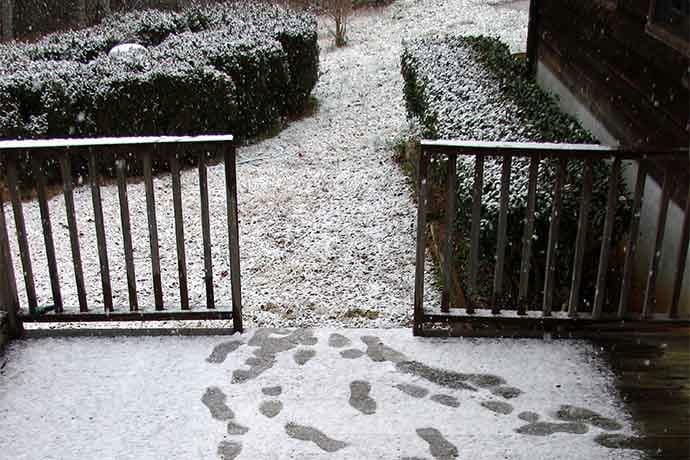 Put on a pair of boots and walk through soft snow. No snow around? Mud works too. Or get your shoes wet and walk along a paved sidewalk. If you want a more permanent imprint, wet cement might be a better choice. But if you really want to leave a mark, well you may already have one: your digital footprint.

Most Americans have cell phones, and most cell phones have cameras. So it is no surprise that a lot of pictures are being taken, and that many of us are photographed just about every day (both intentionally and unintentionally). What might come as more of a surprise is that we don’t just get recorded with cell phone cameras, but also with surveillance cameras found throughout both suburbs and cities. In some cases the goal is to help identify terrorists, while in others cities hope to prevent more common crimes including vandalism and car theft.

Perhaps the hardest place to remain off of camera is the car. Police cars, road signs, traffic signals, and bridges all frequently have cameras recording license plate numbers, and the date, time, and location of each scan. In some cities we might be recorded while taking the bus or the subway. In others, while we swing on a play structure or rest under a tree. Even when cities themselves do not heavily invest in surveillance technology, private businesses do. Some record what happens between their own walls, while others place cameras just outside and monitor those passing by.

Does anyone actually have time to watch all this video? Probably not, but fortunately (or unfortunately if you don’t want to be found) they don’t have to. If a car was broken into on 5th and Broadway between 2:00-4:00 PM, and a witness describes the suspect as a white male wearing a green hat heading toward 6th street, there is software to search the video efficiently.

The goal of heightened levels of surveillance is usually positive, and we appreciate the help it provides when things go wrong. But much of the time we do not realize that it even exists, and we leave our digital footprint throughout the world, never knowing if and when it will resurface.

Cameras are not the only technology that silently captures us. Wherever we happen to be, approximately 12,400 miles above us are at least four GPS satellites. They determine where we are by individually calculating how far we are from them. Software then uses a surprisingly simple mathematical principle known as trilateration to determine our longitude and latitude. Unlike triangulation, which measures angles, trilateration uses the geometry of spheres, circles, and triangles to determine locations.

GPS satellites do not locate individuals per se. They are able to locate receivers in devices that we carry, or that carry us. Just about all cell phones have GPS receivers built in. Cars with OnStar can be also be located via GPS, as can any car with a built in navigation system.

Most people want to have GPS receivers in their devices. They are necessary for map applications to tell us how to get where we want to go. In the case of OnStar, they also provide us with an extra safety net in emergency situations.

At the same time, these receivers help contribute even more data points to our digital footprint. When they are on, they record our location, and often also mark the longitude and latitude of the pictures we take (and often share). The longitude and latitude data that they provide can be transmitted using a variety of apps, so that our friends and family can find as. Of course, there is always the chance that we don’t want to be found, or that this data might get shared with people we we not aware were tracking us.

How about our actual shoes? Clearly they can leave physical footprints on the ground, but can they also leave digital footprints? So far, the answer is not usually, but that day may be coming as well. And it’s not just shoes; all of our clothing has the potential to store and share data.

It is not the actual clothing that would share information about us, but the tags put on the clothing. Radio Frequency Identification is a technology sometimes known for tagging farm animals, but it can also be used to tag the products that us humans purchase. Some retail stores, including Walmart and Target, use RFID to label products in order to better keep track of them in the store and improve convenience for shoppers.

But what about when the products leave the store? The RFID in the tags can still be read by an RFID scanner. This is unlikely to be a practical concern for the time being as we typically remove and discard tags after purchasing clothes. But there remains the potential to embed the RFID into what we wear such that we don’t realise it is there. If clothing companies making this a regular practice, the next time we walk into the store wearing a RFID embedded into our apparel, the store could scan us with an RFID reader in the frame of the store or under the entrance rug.

The scanners could instantly share our purchasing history with store employees. If I purchased a red sweater last month, the sales assistant would know this as he or she greets me, and perhaps offer to help find matching pants. If I have a history of returning most of my purchases, the sales associate would know that just as easily, and maybe decide not to offer any assistance at all!

Even more amazing than the idea of RFID tags hidden in our clothes is the idea of RFID tags actually woven into what we wear. At least one company (Advanced E-Textiles) already makes washable, thread-size, tags that that can be sewn into garments. They are so small that they are not even noticed by the person wearing them!

When we are not being recorded, located, and tagged by others, we are frequently using social media to record, locate, and tag ourselves. Instagram, Twitter, and Facebook are just three of many applications used by tens of thousands of Americans every day. These companies thrive largely because so many people like to share so much about themselves. Most people would be alarmed if the footage of us swinging at the city park taken by a hard-to-see camera was released to the public. However we might get a kick out of recording ourselves on that same swing and posting it on Facebook. And we probably wouldn’t hesitate to volunteer our location while we’re at it.

For the most part we do not run into problems sharing friendly pictures and video about ourselves. When a person shares something more controversial, even completely inappropriate, frequently there are no immediate consequences. However, all that we share also contributes to our digital footprint, and it isn’t always easy to get rid of.

For example, I might share a picture of myself on Facebook, and later decide that I don’t really want others to see it. I can log in, find the picture, and click delete. I do not see it anymore, and my friends probably do not either. However, it is unlikely to really be gone. Deleting from certain social media sites such as Facebook might mean that it gets removed from the site, but it could well still be found on the company’s servers. In the case of Facebook, the company states:

When you choose to delete something you shared on Facebook, we remove it from the site. Some of this information is permanently deleted from our servers; however, some things can only be deleted when you permanently delete your account.

And permanently deleting an account is different, and a bit more work, than disabling an account. Most people do not take the time to understand the precise language of each social media site. And even when we do understand how it all works, our images and comments could already have been downloaded, copied, and shared by others. All this leaves most people with a digital footprint much different than the one they imagine.

Just about everyone leaves digital traces of themselves on a frequent basis, both unwittingly and intentionally. We are usually happy to do so, as the information we leave behind can be used to help us in emergencies as well as to build and maintain relationships with friends and family. However, we should realize that once digital information about us has been recorded or posted, it is largely out of our own hands. The picture of us created by collecting all of the data on us floating around in digital format might be much different than the picture of us that we carry in our minds.

9 Ways You’re Being Spied On Every Day