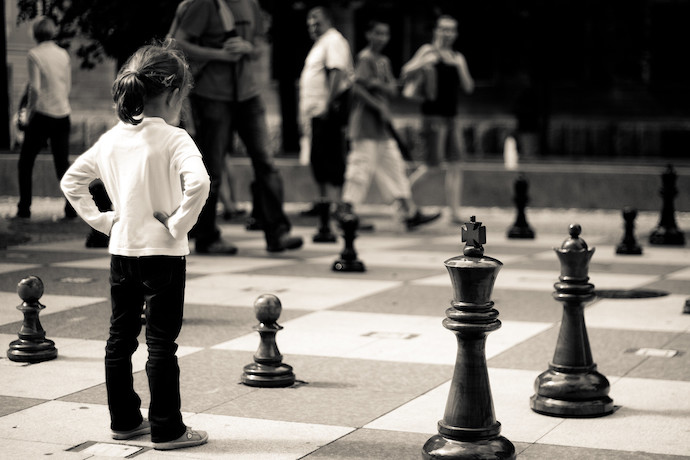 What do you think when you hear the term “deep blue?” There’s a lot of things which are a nice shade of deep blue; it may even be your favorite color! Did you know, however, that the term “deep blue” has a second meaning in artificial intelligence, and it was one of the milestones in creating the AI we have today?

This is because Deep Blue was the name given to a chess-playing AI programmed by IBM, which emerged around 1995. You may be familiar with AI in video games; it’s what pilots your computer-controlled teammates and what makes the enemies feel like a challenge to defeat. Back in 1995, however, AI was very simple and didn’t really do much past moving a small character around a screen.

It came as a shock to the world, then, when IBM announced a supercomputer that could play chess at the same level as a human. Even better, IBM said their bot couldn’t beat just anyone; it would be able to beat the top grandmaster of chess at the time, Garry Kasparov.

This may seem very trivial now; of course, AI is very good at chess in this day and age! At the time, however, this claim was huge. The calculators and cash registers that people used on a daily basis could defeat a grandmaster at chess!

The first match was held on February 10th, 1996. To everyone’s surprise, Deep Blue actually managed to win a game against Kasparov, sealing itself as the first ever computer to beat a grandmaster at chess. While it won the battle, it did not win the war; Kasparov managed to win the match at 4-2.

This didn’t deter IBM, however! They went back to do fixes on Deep Blue and requested a rematch in May 1997. This time was different; Deep Blue managed to squeak out a win with a score of 3.5 to 2.5.

This win shook the world in both positive and negative ways. On one hand, people saw this as the first major breakthrough of AI and a sample of what the future holds. On the other, people believed IBM had somehow cheated in order to make people like them more. Kasparov himself pointed at a move that Deep Blue in one game, calling it “too human” to be done by an AI. IBM responded that the move was actually a bug in the AI’s program, and didn’t intend to be done.

Whichever way, Deep Blue was unfortunately scrapped soon after this momentous win. You can still see Deep Blue’s games online, however, forever showcasing the moment where AI started to outsmart the humans. Take a look at the links included with this article to see some of those momentous games!

The next time you’re playing a videogame against an AI, whether it’s a board game or a strategic videogame, take some time to consider the code behind the actions. While gamers expect AI to be on-par with them, there was once a time where a computer playing chess was regarded as a technological marvel!

Why Kids Should Start with AI Early