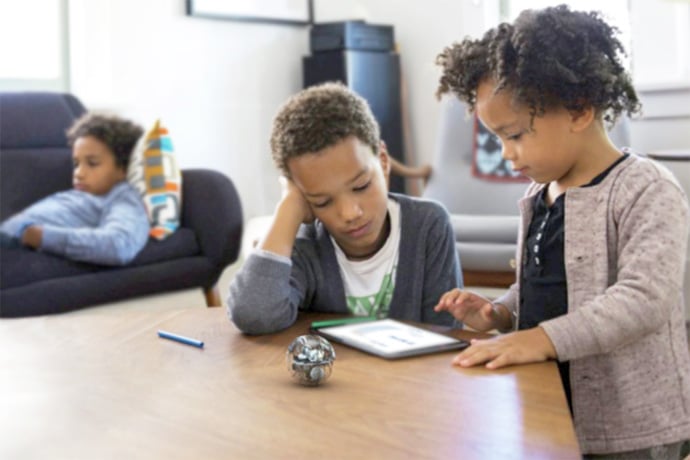 If you have not seen Sphero, it’s a small hand-sized ball you can program easily to change colors, run a circuit, keep beat with a song, and many other fun ideas.

The Sphero robot is fun for kids and fits well into school curriculums. For example, at least one science teacher uses Spheros to replicate the orbits of planets around the sun, with each Sphero planet programmed to make a circuit identical to a real planet. Kids see an abstract idea — planets orbit around the sun in different paths at different rates — operate on the floor in front of them.

It has taken a few weeks of trial and error but these 3rd graders conquered planet revolution! @SpheroEdu @tickleapp pic.twitter.com/Ebo84vFr4S

Getting your Sphero started also is fun: you tap on it two times to wake it up, as in, “Knock, knock! Anyone home?” Then your Sphero lights up to let you know it’s ready to go.

Unlike programming with a computer and keyboard, to program a Sphero robot you use an iPhone or Android Sphero SPRK app to drag blocks, specify what the robot will do when it processes the block, and then order your blocks to make Sphero perform the actions in order. Programming Sphero is more hands on with immediate feedback from the robot.

The small size of the Sphero robot and ease of programming makea it perfect for kids, schools, and families.

In April 2014, Sphero launched SPRK Education to support teachers, parents, and kids using Sphero to learn programming, robotics, and math in a fun interactive way. SPRK Education included the cute round robot and a few software tools including MacroLab, software to program the robot’s behavior, as well as lesson plans and an online community to share experiences and help others.

Recently, Sphero launched Sphero SPRK edition based on over a year of experience with tens of thousands of kids, teachers, and parents. MacroLab has been renamed to Sphero SPRK and updated to make it even easier to drag and drop blocks to program the robot.

The updated Sphero SPRK app also includes OVAL, a C based programming language. What does C based mean? C is a programming language that connects directly to the 1s and 0s your computer uses to do things. OVAL lets you write code to directly control your Sphero robot with a few robot-specific changes to the C language.

Now you can program your Sphero with blocks or text-based code. Kids can learn to program the robot with blocks then evolve to coding with OVAL which, in turn, can help familiarize them with how C, C++, Python, Ruby, and other languages work. However, coding your Sphero with OVAL is not required. OVAL simply provides a path for kids who want to evolve from block programming to other languages.

The new Sphero SPRK also includes new packaging which extends the learning to the mundane act of pulling out your new round robot. Kids can see a neat exploded diagram that shows how the Sphero is built, for example. And a thick cardboard protractor is included to help determine angle measurements when you program your robot. The newest Sphero also has a clear shell so you can see your what makes your robot run.

Here’s the Sphero SPRK video which shows the new robot and how the updated app works:

Finally, in addition to the Sphero SPRK app, you can use other software to program your Sphero robot. Tynker and Tickle also work with Sphero, if you happen to have a drone or use other robots or connected devices. However, only the Sphero SPRK app lets you use OVAL to program your Sphero. The others use blocks to create and define steps your robot performs in sequence.

The links below let you explore Sphero and how it is used in schools, after school groups, and homes.

An infographic with lots of data about how SPRK has been used in education in its first year.
http://visual.ly/sprk-infographic-year-review

Works with Sphero, Dash and Dot, Parrot drones, and other robots. Their Twitter stream has some amazing school projects.
https://twitter.com/tickleapp
https://tickleapp.com

How To Use Sphero The Robot For Incredible STEM Lessons