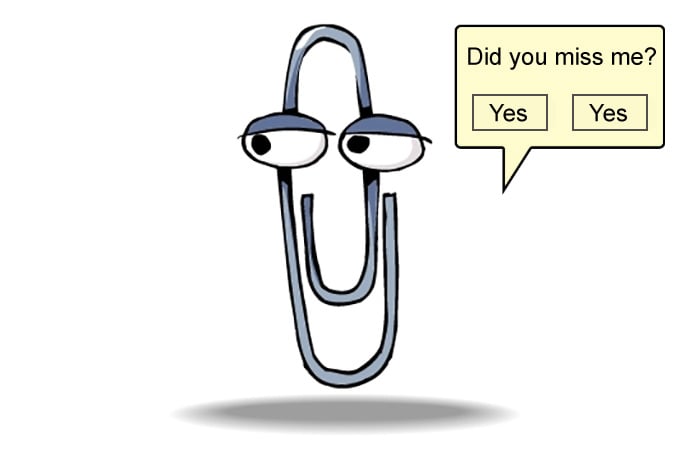 The year was 1995. Approximately one in four US households owned a computer, with that number rising quickly. Citing research from Stanford psychology professors Byron Reeves and Clifford Nass, Microsoft had reason to believe that one of the next big things in computer usage would be a conversion from a graphics-based user interface to a more social interface.

To meet this perceived need, Microsoft released Microsoft Bob, an enhancement for Windows based on the metaphor of a house with rooms and household objects that acted as programs, instead of files and windows. Within a year, Bob turned out to be one of Microsoft’s biggest flops. However two years later a soon-to-be ubiquitous paperclip emerged from this idea of making PC use more social and interactive.

That paperclip was named ClippIt, often referred to as Clippy. Clippy was an office assistant that popped up just about anytime a user opened Microsoft Office and began typing up a document. Clippy intended to guide users through Microsoft Office by offering tips on formatting and features according to what the user typed.

If one started a document with “Dear so-and-so,” Clippy might pop up offering tips on writing a letter. Upon opening Excel, one might be greeted by Clippy offering tips related to formatting a spreadsheet. Considering the many relatively-new features of Office software used by thousands of first time PC owners, having an office assistant to help out seemed like a good idea.

But Clippy turned out to be less handy than Microsoft hoped. True, the first time a user tried out a new feature, Clippy might offer useful advice. However, Clippy was not able to learn from the user and instead relied heavily on pre-planned responses. As such, he quickly became more of a nuisance than a helper, popping up repeatedly with the same questions and responses. Moreover, for almost a decade it was difficult for Microsoft users to get away from Clippy; he was included in Windows 97-2003, popping up by default. Clippy was still around in Office XP, but not as a default feature. By 2007 the world was tired of Clippy and Microsoft turned him off for good before releasing Office 2007.

Today Clippy is long gone and the current high school and under crowd likely never met this somewhat intrusive assistant. However, many of us are familiar with the modern day versions of digital “helpers”. Think Siri, the voice-activated iPhone program that can find you the best local restaurant, give you movie reviews, or play that song you want to hear. Siri is the first assistant from CALO (Cognitive Assistant that Learns and Organizes), created by DARPA, and was inspired partially by Clippy.

Alexa from Amazon, Google Home, and Cortana, a more sophisticated Microsoft assistant, all were created with the hopes of enabling us to seek assistance from digital helpers. Fortunately for these more modern-day assistants and those of us who use them, artificial intelligence has made the gains necessary for them to speak to us, not just at us. And if AI continues to develop at the rapid pace we see today, perhaps one day we will scoff at our current “high-tech” assistants the way those who recall the days of Clippy mock him.

How Clippy changed the world

The History of Clippy