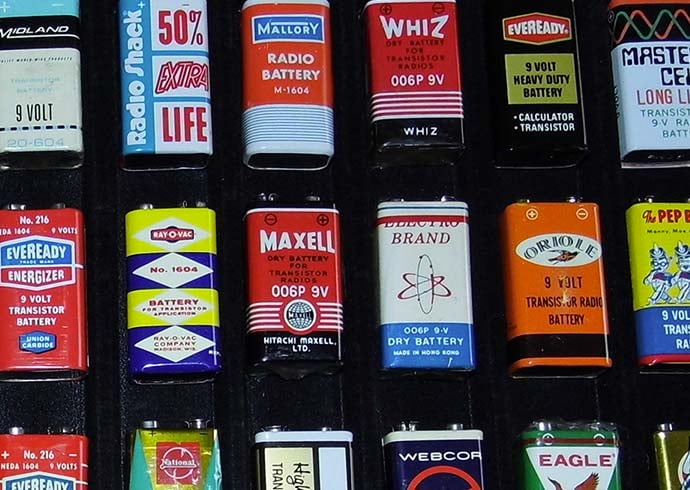 Electronics use a massive amount of electricity. No power equals no computers. Some electricity is provided on demand from power plants when we plug into a wall outlet. Batteries store electricity and deliver it slowly, for example, in our phones and wireless keyboards and computer mice.

So what is a battery exactly? It’s two chemicals that, when mixed together, generate electricity. A battery is designed to keep the chemicals apart. When you connect one end of the battery to the other end, however, the two chemicals send a stream of electricity from one end to the other. If you put a light bulb in the middle of this flow of electricity, the bulb will light up.

When these two chemicals mix, negative particles in their atoms called electrons begin to flow and create electricity. Some chemicals work better than others. And, over time, the chemicals degrade and no longer cause electrons and electricity to flow.

Batteries are either primary, used once then tossed away when spent, or secondary, used and recharged multiple times.

We use batteries in all kinds of devices, from phones and laptop computers to hearing aids, remote control cars, dolls, cars, watches, cameras, and almost every kind of mechanical and electronic object.

Alessandro Volta created the first battery, called a voltaic pile, in 1800. He stacked copper and zinc plates one on top of another with wet paper in between each plate. The paper had soaked in salt brine. While voltaic piles product electricity for long periods of time, the salt brine wears down the plates and ruins the battery.

Voltaic pile batteries were used only for experiments because they did not produce a steady current of electricity. British chemist John Daniell in 1836 created the first batteries with steady current, called Daniell cells. They were used for telegraph networks. Daniell cells were wet cell batteries, using liquid chemicals stored in glass or copper containers. Today, we use dry cell batteries with two chemicals in paste form.

The word electron comes from the Greek word for amber, the yellow fossilized sap from evergreen trees. Ancient Greeks discovered that amber, when rubbed with a dry cloth, attracted bits of paper. British physician William Gilbert experimented with this attraction effect and, in 1600, called it electricus to describe an amber-like attraction. The word electricity was first used in 1646 by Sir Thomas Browne based on Gilbert’s word. We call it static electricity.

Benjamin Franklin first used the term batteries in 1748 to describe Leyden jars, devices to store static electricity. Franklin thought Leyden jars next to each other looked like batteries, or rows, of cannon used in the military that would fire at the same time. The metal terminal rod that sticks out of a Leyden jar also might have reminded Franklin of a rammer, long rods used to pack cannons with powder and cannon balls.

Common battery sizes are much older than you might think. The D battery, for example, was introduced in 1898 as the first battery for flashlights. AA batteries first appeared in 1907 and AAA batteries appeared in 1911.

The image below, from the current issue, presents this story as text and images. Right mouse-click the image to open it in a new tab and see it full size. Or download the PDF file.

How Do Batteries Work?

History of the Electron