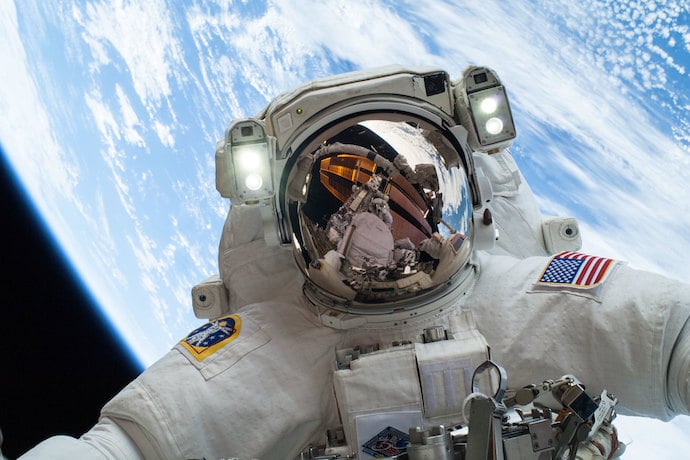 3D printing has been spreading all around the world over the past few years. You may have seen the machines popping up in your school or local library, offering plastic printing services. But did you know it’s actually spreading much further than that? 3D printing has made its way into outer space!

That’s right, there is a 3D printer on the space station.

3D printing, also known as additive manufacturing, builds up parts and shapes one layer at a time. The plastic printers you may have seen usually feed in a thin plastic wire, which it melts down at very high temperatures. It then moves around in a pattern programmed into it by a computer model created on a computer.

This process is helpful for astronauts because it provides flexibility. When you are in space, you can’t go down to your local store to pick out a wrench if you forgot one. Astronauts living aboard the International Space Station (ISS) are living about 254 miles above the surface of Earth. Therefore, they have to live on limited supplies. They use whatever they brought with them or whatever can be sent to them on newly launched rockets.

3D printing provides a new option. By having a machine on board that can make new items, astronauts can print what they need when they need it. This could also be helpful on longer spaceflights in the future to places like Mars, so that equipment can be made along the way and astronauts can adapt to new situations. If you plan on becoming an astronaut, you could be one of the first to use it for this purpose.

The first 3d printed part was made in space in 2014 by company Made in Space using a printer located on the ISS. Since then, it’s helped to produce more than 100 parts and tools on board the orbiting laboratory. There’s now even a printer that can turn old 3D printed parts into new ones called the Refabricator.

Students have even gotten the chance to 3D print parts in space. Through multiple 3D design challenges, people have been able to submit models they think would be useful to humans living on the space station. The selected winners were printed in space! So far, the winning parts that have been printed include a multipurpose tool and a satellite launcher.

Other space 3d printing projects are already underway as well. NASA recently finished its 3D printed habitat challenge where college students and professional teams designed and 3D printed prototype homes that could house future astronauts on our planetary neighbor. The winning design looked a bit like a beehive.

Other recently announced projects plan to take steps towards 3D printing a spacecraft in orbit around Earth, as well as 3D printing human organs in microgravity. Both are a long way off from actually happening, but it’s important for scientists to experiment first to help make it a reality.

Do you want to explore space 3D printing? Check out NASA’s resource page. There you can find 3D models of everything from Mars rovers to satellites to sections of the moon on which humans have walked. They are fun prints you can test out on your own Earth-based 3D printer. You can even find a model of the first item 3D printed in space to meet the needs of an astronaut, a wrench. And keep your eye on NASA’s websites. You never know when they might have another contest open that could let you send your own 3D model to space!

Wrench Made in Space